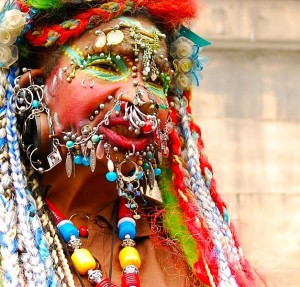 In our society, body piercing was at one time seen as a subversive symbol of the counterculture.  Beginning in the late 1960’s and early 70’s, body piercing began appearing in underground clubs, and was considered an ‘extreme’ practice.  However, in recent years body piercing has been garnering an increasing amount of mainstream acceptance. And while some people may still see body piercing as a fringe activity in America, cultures around the world have been taking part in body piercing for centuries.

World cultures and mainstream religions have vastly differing views on piercing, with some prohibiting the practice, with others touting its merits.  In America, the majority of people who get pierced cite individuality as their motivation.  While some body piercing jewelry is purely aesthetic, other pieces have deeper meaning and significance.  No matter what the reasons are, body piercing in America is no longer a fringe activity relegated to the rebellious few, but a permanent part of mainstream society here to stay.