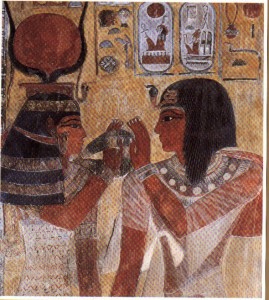 In case you think body piercing and tattooing are ‘new’, think again.  Body piercing in one form or another has been practiced for thousands of years, and not just by African cultures.  For instance, evidence of nose piercing has been recovered dating back to biblical times (2000 b.c.) in the Middle East, as well as mentions of earrings and nose rings (made of gold) are found in the book of Genesis (24:22).  In many of the older societies, it was the size of the ring or jewelry that denoted a person’s wealth, with earrings and nose rings of gold given instead of the finger rings of today are to symbolize marriage.

Body piercing and the use of body jewelry in the ears and noses spread to India in about the 16th century.  A combination of nostril piercing and ear piercing joined by a chain was common amongst females and was believed to lessen the discomfort of childbirth.  In modern times, piercing began appearing in the 1960’s among the hippie movement and was further adopted by the Punk movement of the 70’s and used as symbols denoting rebelliousness against a conservative establishment.  During the early 1990’s body piercing began to be seen by mainstream devotees and by the end of the nineties broke through in popularity as an acceptable form of self-expression by anyone in America.