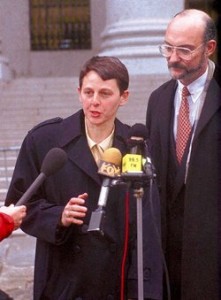 On Wednesday, the American Civil Liberties Union filed a lawsuit on behalf of 14 year old Ariana Iacono of North Carolina, who has been suspended numerous times from her pubic school on account of her pierced nose.  As mentioned in an earlier story in Body Piercing News, Ariana is a member of the Church of Body Modification, whose tenets endorse body piercing as a sacred religious rite.   The ACLU has determined that Miss Iacono’s constitutional rights have been violated by the school suspending her on numerous occasions under the guise of dress code enforcement.

The lawsuit demands Ariana be reinstated in her school immediately and notes that she has been kept from attending school for over four weeks over the piercing issue.  She and her mother, Nikki, observe their faith in their religious beliefs through body piercing and modification, and are looking forward to their day in court.  According to their beliefs, tattoos, body piercings and body art are seen as pathways to spiritual divinity.  The case hinges on interpretation of the Johnston County school system’s dress code that allows for exceptions that are due to ‘sincerely held religious beliefs’.  It is also clearly stated that school administrators are not to make determinations on what may be exempted, but are only to determine if such expressions are part of a sincerely held belief.

Terri Sessoms, spokeswoman for Johnston County schools, would not comment on the actions taken against the student, or make any detailed comments except to state that the school was aware of the pending lawsuit.

One thought on “Update: ACLU files lawsuit on behalf of North Carolina Teenager suspended from school for nose piercing”